There’s a painting I sort of completed this year that I called Tech Boy. It’s a painting I did just for the hell of it because I thought the subject was an interesting character. Tech Boy is a name I gave to this man that I’ve seen on the street. He walks to work carrying a large, black computer bag, has another smaller bag around his waist, wears a headphone,  and holds a music player in his hand. He made quite an impression on me the first time I saw him because he looked like he was fully geared up. At first, I thought he was a young man in his mid-twenties but on closer inspection he looked much older. His face had that worn out, haggard look of an older man. There was something definitely wrong with one of his legs because he walked unevenly.  A co-worker, let’s call him Mr. B,  had also seen him and we’d speculate about Tech Boy’s background.  Also, around this time I’d just gotten back into painting again and was looking for subject matter. He was an odd enough character that I thought I saw possibilities of a painting of him. I just didn’t know in what context. A painting of him walking down the street did not inspire me. I would scratch out thumbnail sketches in my little sketchbook to try spark an idea but eventually I just put it in the back of my mind and turned to other painting projects.

Sometimes I would see him at McDonald’s getting breakfast. This gave me an opportunity to get a better look  and maybe do a quick sketch with my pen.

On a side note, this McDonald’s I go to in the morning is full of characters trying to get free coffee by pretending they were back for a refill. Many of them succeeded. I would observe many other things.  A derelict at the beverage fountains is refilling a used plastic cup he found somewhere outside. There’s a man that would sometimes burst out in hysterical laughter over something he might have seen. He seemed harmless enough, though.

A retired, old Japanese man and I would observe the going-on while sipping our morning coffee. He told me, with a laugh, that it was better than staying home and watching TV. I would smile and nod my head in agreement. 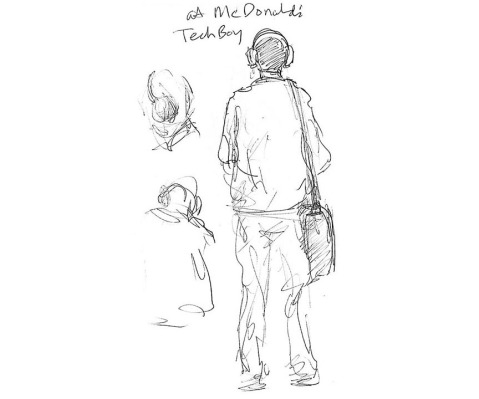 Idea for the painting

I’ve started regularly attending this Sunday figure drawing session and that Sunday group was invited to participate in an ocean themed exhibit at the Honolulu Hale. It was called Ke ‘ike o ka Moana: The Knowledge of the Ocean. I already had one painting in mind and working on a second one to submit to this show. So my mind set at this time was on the ocean. It just happened one night that I was looking at my Picasso and Modigliani art books. Picasso’s blue period paintings are some of my favorites, especially the paintings of people on the beach with the ocean and sky in the background. I had a sort of Aha! moment. I suddenly knew how I was going to paint Tech Boy. The painting would be simple and I thought of calling it Tech Boy Listening to the Sound of the Sea.

I’m also a big Modigliani fan and for some reason I decided to also put a touch of Modigliani in it. One of the distinctive aspects of Modigliani’s portrait paintings is the tilted head. I decided to tilt the head and also not to do the full figure. It was going to be a hybrid in the manner of two of my favorite artists. This was what my pencil sketch looked like.

Eventually, I put it to canvas based on the above pencil sketch. It doesn’t really come close to the actual likeness of Tech Boy but I plan to re-do this painting to make it more closely resemble him. It took about two years from the first time I saw him till I painted his picture and I think it’s not bad for something that I just did for fun.  Going through this process also provided a learning experience for me.

Now that I’ve done Tech Boy I can turn to another person that Mr. B and I have talked about as another subject for a painting. We don’t know her real name either so we’ve named her Penelope, well, actually Mr. B did. She used to hang out and roam about our street and either be laughing for some unknown reason or screaming and cursing at the passing cars. Mr. B would sometimes let me know that she’s out there “raging against the machines.” A painting could actually come out of this called Penelope’s Rage Against the Machines. But first I’d have to scratch out some thumbnails in my little sketchbook.